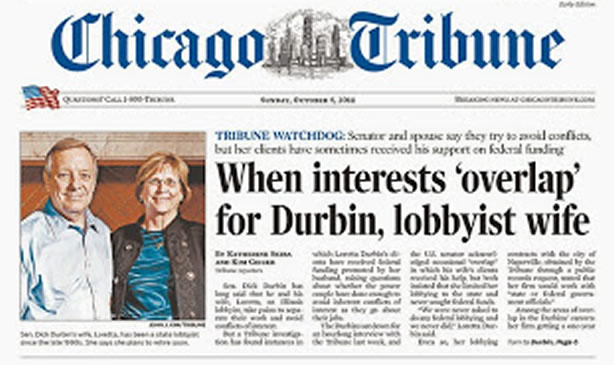 In Illinois, there’s only one political party. It’s the “Combine” – the collaborative combination of Democrat and Republican politicians and party officials who work together to harvest the taxpayers’ money.  (Credit John Kass, Chicago Tribune writer, for coining the term about 16 years ago.)

Jim Oberweis, the GOP Senatorial candidate facing Durbin in November, is a member of the Central Committee.  He’ll have four strikes against him when he comes up to bat in November.

(1) Illinois GOP Senator Mark Kirk has flip-flopped multiple times on whether or not he’ll endorse his fellow Republican against Durbin.  The net is that Kirk isn’t a factor, but he is a loyal Combine Guy.

(2) It will be hard for Jim Oberweis’ wife, Julie, to vote for her husband; she’s officially a resident of Florida.

(3) Oberweis’ campaign strategy is boxing, not fighting, Durbin.  In a radio ad, he compares Durbin to the critics of the late and former President Richard Nixon. (Now there’s a timely analogy.)  Meanwhile, on September 30, 2014, the Chicago Daily Observer posted a video of Durbin lying about Obamacare.  That would have made an effective campaign ad against Durbin, don‘t you think?  But that would be fighting – not boxing.

(4) According to the Chicago Tribune, “National GOP group won’t commit to helping Oberweis.”

U.S. Sen. Rob Portman, R-Ohio, spoke at a reporters’ breakfast hosted by the Christian Science Monitor. He is vice chairman for finance for the senatorial committee, which works to elect Republicans to the Senate.

Portman was asked whether the committee would give Oberweis financial help or other assistance in his race. He also was asked to gauge Oberweis’ chances.’

He said: ‘I don’t know what the NRSC decision will be there. I have been told that that (Illinois) race has closed somewhat. It’s a single-digit race based on some polling, but I just don’t know enough about it.’

Does he expect the committee to help Oberweis?

‘I don’t know,” Portman said. “I mean, frankly the playing field (for Republicans) is already very broad. I don’t think people would have been expected to be talking about Minnesota and New Hampshire and Virginia and Oregon, and we are, so the playing field is already quite broad.’

Illinois is a one-party state, masquerading as having two parties.

The polls have Durbin ahead by 7 pts.  Blowouts are not seemly – not the Combine Way.  I must appear to be a two-party race.

UPDATE:  The Sunday, October 5, 2014 edition of the Chicago Tribune gave the Oberweis campaign a gift in the form of an article entitled “When interests ‘overlap’ for Durbin, lobbyist wife.”

It offers a lengthy explanation of how the Senator’s wife has developed a lucrative lobbying career in Illinois.

It’s publication in the Sunday edition, above the fold, begs the questions:  Why hasn’t the Oberweis campaign been hammering on this arrangement for months?  And, why did the Tribune decide to run this piece a month before the general election?