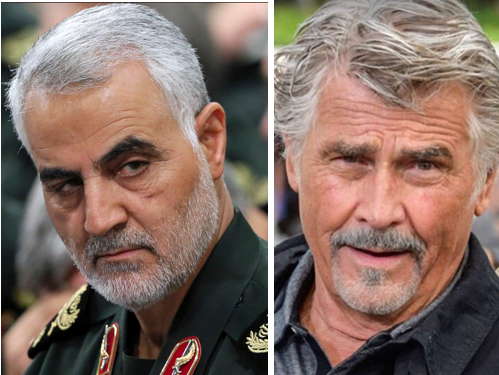 The coming motion picture “The Martyr from Tehran” will air on Netflix as an Original sometime in mid-late 2020.

The film with be a docudrama chronicling the life, brilliant military career, and sudden and brutal death of Iranian General Qassem Soleimani.

The project is being managed by Harvey Weinstein, directed by Robert DeNiro, and solely funded by Barbara Streisand.

The lead role of General Soleimani will be played by James Brolin (above right), who narrowly won the role in final competition with George Clooney (below).

Despite false reports of a pending divorce between Brolin and Streisand in 2018, the couple remains married.

Streisand is reportedly spending tens of millions of dollars on the movie which will begin with a young Soleimani fighting bravely against Saddam Hussain’s Iraqi Army along the Iran-Iraq border.

The role of the General as an aggressive Lieutenant will be played by Josh Brolin, James’ son.

The storyline traces Soleimani military career form his time as a promising junior officer until he fulfills his full potential as a crafty tactician in warfare, and a humble humanitarian in his dealings with friends and enemies alike.

The portrayal of the General will offer the viewing public an alternative to the cynical, false  image of Soleimani found in some news outlets as being a “terror-meister” responsible for the brutal death of many, including hundreds of American service members killed by IED’s in Iraq.

The final moments of Soleimani’s life will see Soleimani surrounded by small children inside a modest hut, in a poor village, outside of Baghdad where he is telling them about the revolutionary Iranian cleric Sayyid Ruhollah Musavi Khomeini, known in the Western world as Ayatollah Khomeini.

It was then that the brilliant life of the General was ended by a cowardly attack from above.

Netflix will air the movie preceded by a brief overview of Soleimani’s touching story as told by Netflix board members Barack and Michelle Obama. 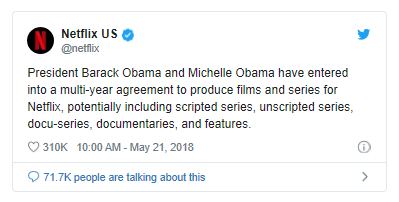