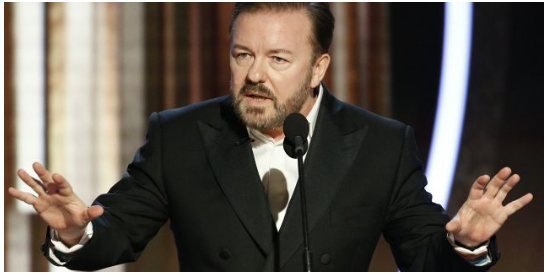 Angry protestors gathered outside the Beverly Hills condo of the 2020 Golden Globe Awards host shortly after the event ended.

FOX News reported that, “The biggest stars in TV and film gathered in Beverly Hills in the hopes of kicking off the 2020 awards season with a highly coveted Golden Globe award, and notoriously controversial host Ricky Gervais wasted no time laying into the Hollywood elite vying for a big win.”

Within an hour after the venue cleared, a group of masked protestors (see below) arrived, via a score of limos, outside the modest building that houses Gervais’ condo.  Gervais was, reportedly, not home at the time. But his chihuahua barked throughout the ordeal. 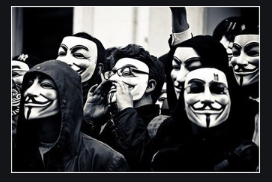 A confidential source reported that a small group of “Stars” raided a costume storage area of a large film production company soon after the awards event ended. There they confiscated more than one-hundred Guy Fawkes masks after bribing the facility night watchperson with an expensive bottle of single malt Scotch, and a promise to introduce the security guard to two of Harvey Weinstein’s many female companions.

According to a confidential source, a group of about 50 A-Listers, and an equal number of wannabees who played bit roles in the films that competed for the Globe awards, were among the demonstrators.

The group chanted “Death to Gervais,” and “Gervais is a Trump sock puppet”.

The chants were led by an unidentified, short-statured male wearing glasses and a dark-hair wig (see in picture above), whose voice sounded much like that of a well-known, elderly A-Lister who made a career of playing tough guys, but who now specializes in Tweeting tough-guy insults to President Trump.

The identity of chant leader could not be confirmed, but several by-standers said they were sure it was Robert DeNiro.

Officers from the BHPD soon arrived on scene and cordoned off the area around the protestors.

Two police sergeants waded into the masked crowd with small notebooks and pens and appeared to be getting autographs for their colleagues from the demonstrators. There was no indication of any attempt by the police to confirm the signatures by asking for a peek behind their masks.

The building housing Gervais’ home was not damaged, and no protestors were detained by the police.

Within thirty minutes, the crowd dispersed and climbed back into the caravan of limos that brought them to that location.

It was later reported that, within an hour of their departure, they reconvened in a swank nightclub where they danced and drank most of the night to celebrate their demonstration of social justice.

No cameras were permitted inside the club, so the identity of most of the Guy Fawkes protestors remains unreported.  But names will likely leak out in the days ahead by those who wish to parlay their attendance into positive publicity.

Thankfully, there is no report of any injury to Beto, although, Beto has since developed a habit of eating dirt.