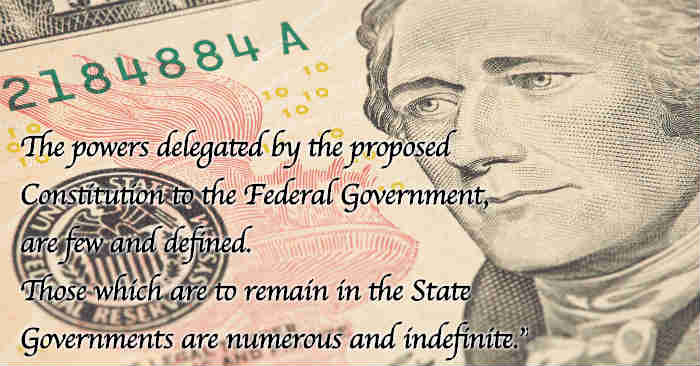 In America, the liberty of We The People is at risk, not from a foreign government, but from our own.

The founders clearly intended that the Federal Government would have a defined set of powers delegated by the Constitution. All other powers necessary for governing would be reserved to the state governments. A single quote in James Madison’s Federalist Papers No. 45 supports that view:

“The powers delegated by the proposed Constitution to the Federal Government, are few and defined. Those which are to remain in the State Governments are numerous and indefinite.”

Nevertheless, despite assurances to the contrary, the states worried that over time their sovereignty would be eroded by the Federal Government. This fear sprang partially from the ambiguous wording in the Constitution including: “to promote the general welfare;” “to make all laws which shall be necessary and proper for carrying into Execution the foregoing Powers;” and “all other Powers vested by this Constitution in the Government of the United States.”

To allay the fear of Federal incursion into state sovereignty, the Tenth Amendment was promised before ratification but delivered later. It read:

“The powers not delegated to the United States by the Constitution, nor prohibited by it to the States, are reserved to the States respectively, or to the people.”

But who decides whether or not a particular power is delegated to the United States, or reserved to the individual states?

Read the full article at https://canadafreepress.com/article/has-the-tenth-amendment-become-a-lie