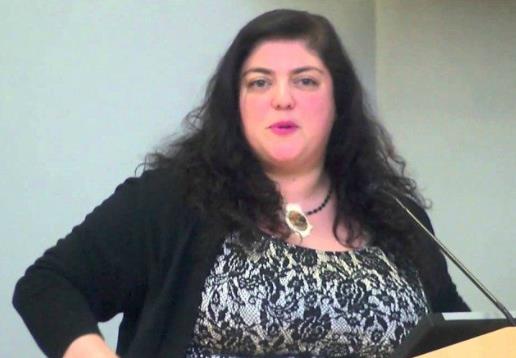 Ms. Randa Jarrar, Professor of English & Physical Fitness at Fresno State University in California was recently honored by the Democrat National Committee as an outstanding spokeswoman for peace and civility. 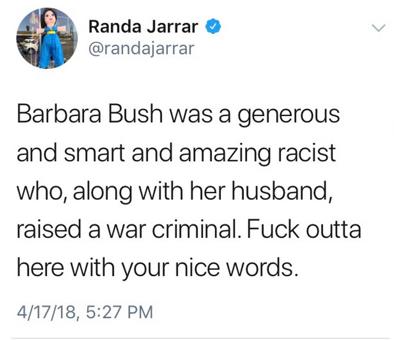 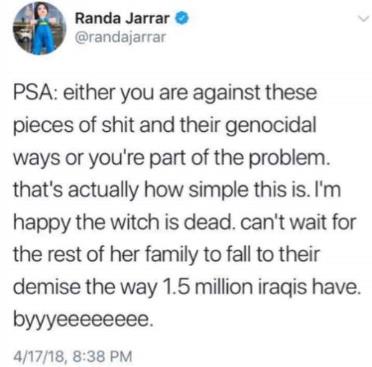 Although Professor Jarrar has been unavailable for comment since tweeting, according to The Fresno Bee “She did return to Twitter Wednesday to thank her supporters. ‘I’m still fabulous, thanks for checking in. Love to all of you who have sent support,’ she wrote.”

Jarrar has an impressive literary background that is profiled on the Fresno State University website:

“Professor Randa Jarrar is an award-winning novelist, short story writer, essayist, and translator. Randa grew up in Kuwait and Egypt, and she moved to the U.S. after the Gulf War.

Her first book, A Map of Home, was published in seven languages & won a Hopwood Award and an Arab-American Book Award. Her newest book, Him, Me, Muhammad Ali, won the Story Prize Spotlight Award. Her essays have appeared in The New York Times Magazine, The Utne Reader, Salon, Guernica, The Rumpus, The Sun, and others.

She has received fellowships from the Lannan Foundation, the Civitella Ranieri Foundation, Hedgebrook, and Eastern Frontier, and in 2010 she was named one of the most gifted writers of Arab origin under the age of 40. She is the executive director of RAWI, the Radius of Arab American Writers.”

In the wake of Jarrar’s recent national notoriety, the Chair of the Democrat National Committee, Tom Perez, has announced that Jarrar will attend the 2020 DNC Presidential Nomination Convention as a Superdelegate representing voters from California, Kuwait and Egypt.

In his announcement of the honor bestowed on Jarrar as the first ever tri-state Superdelegate selected by the DNC, Perez, who shares Jarrar’s proclivity for engaging colorful language, according to CNN, said, “This is a big f___g deal for the distinguished Professor from California, and elsewhere. ”