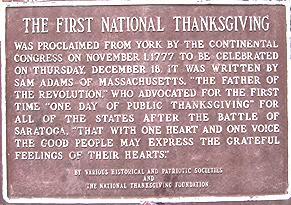 In the fall of 1777, American and British forces engaged in two battles near Saratoga, NY. After suffering heavy losses, the British army fled to Saratoga and surrendered when surrounded by additional American forces. In recognition of this victory, Congress proclaimed America’s First National Thanksgiving. News of the British surrender at Saratoga convinced the king of France to begin negotiations with the Americans, leading to an alliance between France and America in 1778.

“Forasmuch as it is the indispensable duty of all men to adore the superintending providence of almighty God; to acknowledge with gratitude their obligation to him for benefits received, and to implore such farther blessings as they stand in need of… it is therefore recommended to the legislative or executive powers of these United States to set apart Thursday the l8th day of December next for solemn thanksgiving and praise…

[That] it may please him graciously to afford his blessings on the governments of these states respectively, and prosper the public council of the whole; to inspire our commanders both by land and sea and all under them with that wisdom and fortitude which may render them fit instruments under the providence of almighty God, to secure for these United States the greatest of all blessings, independence and peace… [and] to take schools and seminaries of education, so necessary for cultivating the principles of true liberty, virtue and piety, under his nurturing hand, and to prosper the means of religion for the promotion and enlargement of that kingdom which consists in righteousness peace and joy in the Holy Ghost.” Journals of Congress, First National Thanksgiving, November 1, 1777

“Tomorrow being the day set apart by the Honorable Congress for public Thanksgiving and Praise; and duty calling us devoutly to express our grateful acknowledgements to God for the manifold blessings he has granted us— The General directs that the army remain in its present quarters, and that the Chaplains perform divine service with their several Corps and brigades…” George Washington, General Orders, December 17, 1777

“… it is therefore recommended… that with one heart and one voice the good people may express the grateful feelings of their hearts, and consecrate themselves to the service of their divine benefactor…” Journals of Congress, First National Thanksgiving, November 1, 1777