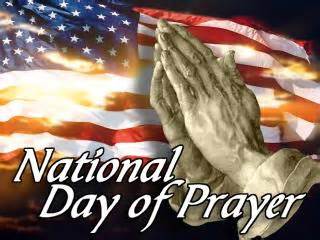 The First National Day of Prayer and Fasting occurred on July 20, 1775.  Congress attended “Divine Service“ and ordered that a copy of the Resolution be “published in the Newspapers, and in Hand-bills.”

“As the Great Governor of the World, by his supreme and universal Providence, not only conducts the course of Nature with unerring Wisdom and Rectitude, but frequently influences the minds of Men…

This Congress, therefore, considering the present, critical, alarm- and calamitous State of these Colonies, do earnestly recommend that Thursday the 20th Day of July next, be observed by the Inhabitants of all the English Colonies on this Continent, as a Day of public Humiliation, Fasting and Prayer; that we may, with united Hearts and Voices… confess and deplore our many Sins; and offer up our joint Supplications to the all-wise, omnipotent, and merciful Disposer of all Events; humbly beseeching him to forgive our Iniquities, to remove our present Calamities, to avert those desolating Judgments, with which we are threatened, and to bless our rightful Sovereign King George the Third, and to inspire him with Wisdom to discern and pursue the true Interests of his Subjects, that a speedy end may be put to the civil discord between Great-Britain and the American Colonies…

[and] that the divine Blessing may descend and rest upon all our civil Rulers, and upon the Representatives of the People in their several Assemblies and Conventions, that they may be directed to wise and effectual Measures for preserving the Union, and securing the just Rights and Privileges of the Colonies…”  Journals of Congress, Resolution for a Fast, June 12, 1775

“… George Washington… General of the American Army… is to repair [take himself] as soon as possible to the Camp before Boston…   We have appointed a continental Fast.  Millions will be upon their Knees at once before their great Creator, imploring his Forgiveness and Blessing, [and] his Smiles on American Councils and Arms.”  John Adams, Letter to Abigail Adams, June 17, 1775

“… that Virtue and true Religion may revive and flourish throughout our Land; and that all America may soon behold a gracious interposition of Heaven for the redress of her many Grievances…”  Journals of Congress, Resolution for a Fast, June 12, 1775

“Should we wander from [The Founding Principles]… let us hasten to retrace our steps and to regain the road which alone leads to peace, liberty, and safety.”  Thomas Jefferson, First Inaugural Address, March 4, 1801