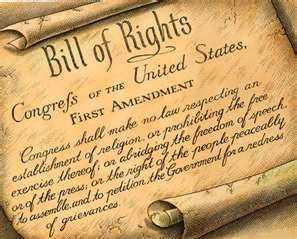 From The Peoples Bill of Rights:
Congress shall make no law respecting an establishment of religion, or prohibiting the free exercise thereof; or abridging the freedom of speech, or of the press, or the right of the people peaceably to assemble, and to petition the Government for a redress of grievances.

Reading from the beginning note that Congress is specifically mentioned and since this is the US Constitution one must assume they are referring to the United States Congress.  Most of the states we know today were unknown at this time and it says Congress not congresses.  In referring specifically to the US Congress, it excludes not only other branches of the national government, but also municipal governments, school districts, parks and shopping malls.  This amendment was obviously intended to protect “religion” from the intrusions of the US Congress.  It is ludicrous to suggest that this is an attempt to protect government from the intrusions of religion.

Historically people came to the “New World to escape government intrusion into their religious practice.  Indeed, upon passing the Bill of Rights (the first ten amendments) which includes the First Amendment, Congress, immediately called for a national day of prayer.  Are we to assume they did not understand the amendments they had just authored and approved?

“Congress shall make no law regarding the establishment of religion.”  It does not say prohibiting or authorizing.  Congress is to stay away from this issue.  “No law.” Regarding free speech or free press, the right to peaceably assemble or to petition for redress of grievances, Congress is prohibited from abridging these rights.  This is a more specific restriction on Congress than that which refers to religion.

Indeed, in mentioning religion first, the Founders are saying this is an important issue.  Then in listing free speech, free press, assembly and redress of grievances, the Founders are saying these issues are also important.  It is an attempt to elevate the importance of these issues that they are included in this amendment.  Even if one argues that the emphasis is not intended, it cannot be argued that the emphasis is not obvious.  The concept of “separation of church and state cannot be found in any foundational document of this great republic.  We must stop retreating on this important issue.
~ Terrell AronSpeer