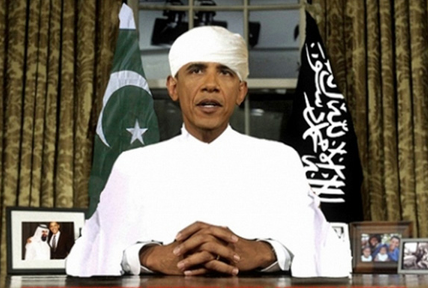 Former U.S. President Barack Obama skyped a message of condolence and apology to Iranian Supreme Leader Ayatollah Ali Khamenei, head of state of Iran and the commander-in-chief of its armed forces, over the death of the Supreme Leader’s close and personal friend, Major General Qasem Soleimani of the Islamic Revolutionary Guard Corps, and commander of its Quds Force.

The message was sent soon after CBS News reported that “Iranian Supreme Leader Ayatollah Ali Khamenei prayed over the caskets of Iranian Revolutionary Guard Gen. Qassem Soleimani and others slain in the attack. Khamenei, who had a close relationship with Soleimani, wept at one point during the traditional Muslim prayers for the dead.”

A video of the message, sent from the Obama seaside mansion in Hawaii, was played after the Soleimani funeral before a small gathering of the top leaders of Iran that included: Mohammad Mahammadi Golpayegani, Chief of Staff; Vahid Haghanian, Chief Personal Aide and Deputy Chief of Staff; Asghar Mirhejazi, Chief of Security Office; and Mohammad Shirazi, Chief of Military Office.

“Your Eminence: It is with deep sadness that I offer my sincere condolences to you and to all Iranians for the brutal assassination of your great friend, a loyal servant of Iran, Qassem Soleimani. May he rest in peace.

I speak on behalf of many Americans and with all members of the Democratic Party in America, who are deeply distressed at the cowardly attack, led by America’s top Infidel, that brought about General Qasem Soleimani’s sad passing – a brave and loyal warrior in the service of Iran.

I deeply bow, with you Your Eminence and all Iranians, to his glorious memory.”

And I humbly offer my sincere and heartfelt apologies for the manner of his departure, although I, of course, played no part in the planning, decision nor execution of the aggressive act that took the life of General Soleimani while he was a guest in Iraq on a humanitarian mission. Nor would I, if still the American President, have been part of such a heinous international crime.”