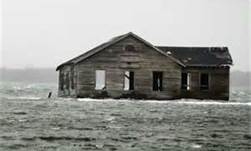 Flood waters rose at an alarming rate.  Homes were moved off their foundations.  Hundreds of square miles of land were under water.  Populations of whole towns were uprooted.  In all, 1.5 million people from several states were displaced.  People were in a desperate state: homeless, and hungry with no place to go.  The Jersey Shore, 2012, in the wake of Hurricane Sandy?

No.  This was the scene along the Mississippi River during the great flood of 1927.  Hurricane Sandy’s displaced population numbers in the tens of thousands with a death toll just over 100; the great flood of 1927 claimed ten times that many souls.  There was no massive government response like there was to Hurricane Katrina.  In 1927 this was not fashionable.  In 1927, President Calvin Coolidge sent Vice President Herbert Hoover to coordinate relief efforts.  With a grant from the Rockefeller Foundation and Red Cross relief workers plus volunteers and donations from all over, the situation was methodically handled.  Coolidge sent Hoover because of his work in Europe after WWI handling relief efforts there.  But the bulk of the resources were from private charities and volunteer workers.  As this was in the deep south there were some unfortunate local issues of race.  You will have to sift through the history to separate the several issues surrounding the relief efforts.

The recovery was handled not by government, but by the charitable acts and funding of generous Americans across the country.  New Jersey residents and many in New York and Connecticut would benefit from a similar effort today.  In 2012, New Jersey and New York residents might even have Katrina envy.  But the waste and fraud during the Katrina relief efforts are legendary.  Months after Hurricane Sandy, and just after a pork laden “fiscal cliff” bill passed congress, a Hurricane Sandy relief bill, loaded down with pork, was rejected.  While residents struggle to put their lives together, congress debates a $60 billion bill to cover what insurance companies estimated was $20 billion in damage.  Congressmen from the affected areas requested over $80 billion in aid.  The $60 billion bill congress debated was over 50% pork with tree planting schemes in the heartland,  repairs at NASA’s Florida facilities and relief for fisheries in Massachusetts, the Gulf coast and Alaska, and too much more to mention.  No private charity could have gotten away with this and none would have tried.  What’s wrong with our government?

I’m glad you asked.  I have written before about the toxic influence government brings to charitable causes.  We have a government that is involved in everything.  For politicians, disasters are just opportunities.  They can funnel some of those funds to pet projects back home and buy a few votes.  They can hold up the bill until they get what they want (assured reelection).  To remove the specter of reelection, we should assure each House member and each Senator that they have only one term before we retire them and elect their replacement.  We should do this until meaningful term limits are passed and the government retreats from their assault on legitimate charity.

Legitimate charity does not have these distractions.  Donors will hold private charities accountable if they fail to produce a good result.  Donors will not support a charity which engages in massive fraud.  We do not have that choice with government.  With government, the game is all shells.  There are no peas.  And your donations are not voluntary.  The government has a thousand distractions to keep you from asking the real questions.  What happened to all those FEMA trailers?  Who all was really involved in the Kennedy assassination?  Who diagnosed Hillary’s concussion?  What happened to Vince Foster?  Do congressmen still have to provide the constitutional justification for legislation they propose?  And you want them to account for relief funds for Hurricane Sandy?  Good luck with that.

Government charity displaces effective, legitimate charity.  When our taxes are alleged to go to all manner of charitable causes–fighting poverty, conquering dreaded diseases or responding to the all too predictable disaster, we feel we have already given.  Isn’t that what our taxes are for?  We feel conflicted; justified on the one hand, uncharitable on the other.  The government throws all the money in the kitty and takes out whatever they want whenever they want it.  They slashed Social Security payroll taxes for a year to fund a big get-out-the-vote bonus for everyone last year, yet we did not feel it in our Social Security checks.  They just borrowed to cover the shortfall.  Your grandkids can pay the bill.  And now that they are all reelected, they have taken up the candy dish.  Is it not apparent what a disaster this all encompassing government has become?  Sandy is nothing.  The disaster resides in Washington DC.  Logically, we can expect nothing better from this government. A more focused $9.7 billion emergency Sandy relief bill which should fund relief efforts through May was finally passed by the house and quickly signed into law.  But this is not over and you can expect the process to repeat itself.

So now is the test; can we put the reins back on the beast?  Is a debt ceiling really a ceiling if we just raise it each time we bump into it?  The federal Government takes in plenty of revenue to service the debt and cover about 60% of its usual expenses.  Allowing the government to “shut down,” forces the government to take a hard look at priorities.  Bill Clinton did not move to the center; he was pushed there by a government shutdown.  It was only then that Gingrich was able to forward a more conservative agenda.  Eventually Clinton signed legislation he had repeatedly vetoed.  To this day he never tires of taking credit for his achievement.

There is little room on Obama’s left and he shows no inclination to move an inch into the vast expanse on his right.  He must be forced there.  This will require courageous Republicans in both houses.  Can large government become smaller without some catastrophic event or armed insurrection?  The answer to this question holds our future.  At this time, in the affairs of government, no other question is more important. ~ Terrell AronSpeer

“The following link is being added several days after this original posting.  Click here .”