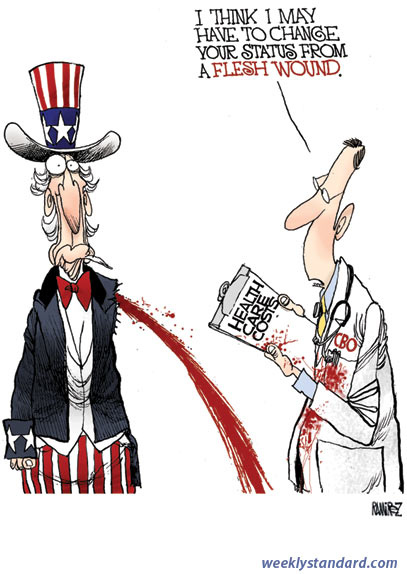 In the cover letter of the May Sentinel, I warned readers – the same IRS who targeted taxpayers with conservative political leanings for audit and harassment, would now be determining how to ration their health care.  EXAMPLE: Barney Frank and Ted Cruz both need a liver transplant.  How do you think that’s going to play out?

Originally, I made this observation in the most general sense.  We have an administration which politicizes everything including every department of government which is under the executive branch.  Also, it could not have escaped your notice that this President seems to think that all the levers of government are provided to him to reward and grant favors to his political supporters.  He passes onerous laws and regulations and then exempts his favorite donors and friends.  He does not stop there; he uses the IRS and Justice Departments to punish his political opposition.  How could this not be reflected in his doling out of health care?  If this seems hyperbolic to you, consider the following evidence.

Sarah Hall Ingram was the head of the IRS department which was over the granting of Tax Exempt Status to apparently left leaning groups exclusively.  She has now been appointed, by this President, to head the IRS department in charge of Obama Care.  Approvals for coverage of health care procedures will go through her department.  She will be little more than a political hit-person (notice the sensitivity to her presumed feminist leanings).  How can we believe that with the favors dealt out to Fisker and Solyndra, both Obama supporters, and the punishment dealt out to Tea Party groups, that the inevitable health care rationing will not be subjected to these same prejudices?  Additionally, the IRS has all your records.  They know to whom you donate money, what you purchase, where and how you live.  No one is in a better position to know your political leanings.  Imagine the long term dampening effect this will have on political expression.

IRS head, Stephen Miller, admitted in Congressional hearings, “The IRS gives horrible customer service.”  NEWS FLASH for Mr. Miller: No one goes to the IRS for their wonderful customer service.  The only service the IRS provides is the same service a bull provides a cow.

President Obama has been parading his feigned anger in front of every camera he can find.  I mean, how dare they interrupt his Guinness marathon golf game for this stuff?  Suddenly the President is outraged at this years’ old scandal.  How fortunate he could contain his outrage during the election.  Defenders of Sara Ingram point out that she left the department responsible for tax deferments six months ago.  However, Congress, which seems incapable of discerning the difference between the noun ‘oversight’ and the verb ‘to overlook,’ first started investigating this scandal over two years ago; so nice try.

Now the Obama administration has tasked the FBI with investigating the IRS.  Yes the same FBI which got right to the bottom of the Benghazi scandal and assured us that Tamerlan Tsarnaev had not yet been radicalized when the Russians warned us about him.  Can you possibly be confident the FBI is competent and independent enough to handle such an investigation?  How would you like to be the FBI agent investigating the IRS?  He will need to keep a tax lawyer on retainer for the rest of his life.

This administration has been involved in a culture of corruption from before day one.  Campaign finance irregularities from 2008 included a mountain of donations just under the disclosure limit and web sites encouraging foreign donations which could not be traced or verified.  Then there was ‘Fast and Furious’ in which people died, including a US border agent.  Solendra and Fisker were just two of dozens of high risk venture capital operations which coincidentally went exclusively to Obama donors.  The tax payer money received by these companies far exceeded the donations they made to Obama’s campaign.  It was a money-laundering scheme and a raid on the treasury.  Obama’s release of a poorly forged birth certificate did not warrant so much as a paragraph on page 12 from his media lapdogs.  Obama’s foreign policy is a scandal in itself.  Respect for the US has never been lower.  He has insulted and double crossed our allies and displayed criminal weakness to our enemies.  He has funded numerous Islamic movements while all but abandoning Israel.  The IRS scandal also includes fast tracking of pro-Palestinian groups and discrimination against pro-Israel groups.  The 2012 election had precincts with over 140% participation and coincidentally, 100% of this 140% voted for Obama.  (As an election judge myself, I can assure you that even if all 140% of the registered voters had wanted to vote for Obama, it is a statistical impossibility that a number would not have messed-up and voted for the opposition.)  Add in Benghazi, which cost American lives, the AP scandal, Extortion 17, which cost American lives and God knows what else they may be hiding and can you imagine any Republican administration surviving any of these scandals?

With numerous displays of callous disregard for the lives of American citizens and a penchant for destroying political opposition without the constraint of any demonstrable set of personal ethics, why on earth would anyone feel comfortable turning over their medical decision making to this or any political administration?  The IRS has been so corrupted, with loopholes carefully crafted for favored Americans, that it should be eliminated.  Originally, the income tax law required an amendment to the Constitution so it could be be passed.  It’s time we considered the Founders may have been right to make such a tax unconstitutional.  They had the foresight to see what a corrupting force such a tax would be.  Repeal the Sixteenth Amendment. Pass a non-discriminatory ‘fair tax.’

There is no provision in our constitution for a government controlled health care monopoly either.  Again the wisdom of the Founders is apparent.  In our Constitution, our Founders also provided for the removal of corrupt elected officials.
Obama Care must be repealed and so must this corrupt Presidency.