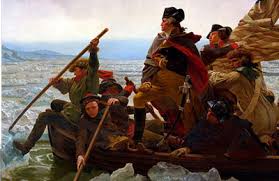 The majority of Washington’s militia enlistments were expiring at the end of the year. Suspecting few to reenlist, Washington desperately needed a victory. Beginning at sunset on Christmas Day, Washington’s plan was to move his army and artillery across the Delaware River and march quietly to Trenton. If all went well, his army would surprise the Hessian Garrison in an early morning attack. River ice and a violent storm, however, created delays and prevented many troops from crossing. Washington lost all hope of surprising the enemy but going back across the river was not an option. When the muskets became wet, Washington ordered, “use the bayonets. I am resolved to take Trenton.”

“… without tents and some of our men without even shoes, [we were ordered] over the mountains to a place called Newton, [PA]… A day or two after reaching Newton we were paraded one afternoon to march and attack Trenton. If I recollect aright the sun was about half an hour high and shining brightly, but it had no sooner set than it began to drizzle or grow wet, and when we came to the river it rained… Over the river we then went in a flat-bottomed scow, and as I was with the first that crossed, we had to wait for the rest and so began to pull down the fences and make fires to warm ourselves, for the storm was increasing rapidly…

During the whole night it alternately hailed, rained, snowed, and blew tremendously. I recollect very well that at one time, when we halted on the road, I sat down on the stump of a tree and was so benumbed with cold that I wanted to go to sleep; had I been passed unnoticed I should have frozen to death without knowing it…” John Greenwood, The Revolutionary Services of John Greenwood, December 1776

“It is fearfully cold and raw and a snowstorm is setting in. The wind is northeast and beats in the faces of the men. It will be a terrible night for the soldiers who have no shoes. Some of them have tied old rags around their feet; others are barefoot, but I have not heard a man complain. They are ready to suffer any hardship and die rather than give up their liberty.” An Officer, Diary of an Officer on Washington’s Staff, December 25, 1776

“We are three hours behind the set time. Glover’s men have had a hard time to force the boats through the floating ice with the snow drifting in their faces. I never had seen Washington so determined as he is now. He stands on the bank of the river, wrapped in his cloak, superintending the landing of his troops. He is calm and collected, but very determined.” An Officer, Diary of an Officer on Washington’s Staff, Dec 26, 1776

7 Years!!! “Crossing the Delaware (1776)” is the 85th monthly letter I have written since November 2009. There are over 1400 quotes now available at RetraceOurSteps.com.