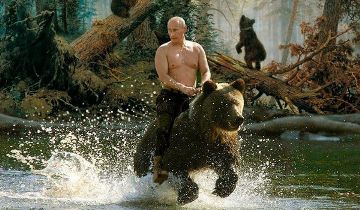 Yes, there is a Crimea River on the Crimean Peninsula whose head waters are north of Yalta and just the other side of the Mickey Mountains.  However the title is intended to be a reference to a song too old for many to remember.  Sadly enough, the sentiment expressed in the song is also true; Ukraine can “Cry Me a River” but the Crimean Peninsula is gone, spirited away by Putin in the dead of daylight as the world watched helpless and seeming not to care.

But our own President Obama stood up to Putin, saying that there would be a “price to pay.”  “We’re not playing games here,” said Obama.  And then, as if to underscore the point, he took a birdie on the third hole.  In words the Secretary of State, John Kerry, would echo, the President pointed out that, “Nations just don’t behave this way in the twenty-first century.”  Well, that should do it.  His behavior is simply unfashionable.  And we all know Russia’s President Putin is just a slave to fashion.

Are we this naive or so willfully blind?  Have we chosen to learn no lesson from history?  If you will allow me just one small Hitler analogy; did not the excuse, offered by Putin, that the Crimea is ethnically Russian, sound eerily similar to Hitler’s justification for annexing Austria?  Did the speed of the takeover and the fecklessness of the world reaction not also mirror the events preceding World War II?  What is the point of teaching history if we learn nothing from it?  From the many episodes of Jay-walking I have seen over the years, I wonder if we even bother to teach history in any meaningful way anymore?

Aggression unchecked is aggression unleashed; history is littered with examples.  Often, we do not get to choose our fights.  However, the action of choosing not to fight is interpreted and the aggressor will include this calculation in future decisions.  At this level of geopolitics, inaction is an action and it will be interpreted as such.  We can pretend not to be a significant player on this stage, but even our exit will have significant impacts.  Like it or not, we will be responsible for these.  There are many actions short of military conflict with Russia.  We could recall our ambassador to Moscow and boot theirs from DC.  We could cull them from the G8.  We could freeze assets and trade deals.  Or we could just take a birdie on Hole #3 and see what happens — sort of a diplomatic Russian roulette.

Are we reassured by the Obama administration’s claim that Russia has too much to lose by taking the Crimean Peninsula?  Once again the President’s ability to misunderstand and miscalculate is staggering.  The energy resources Russia sells to Europe could easily be sold to a dozen other emerging economies.  Europe depends on Russian energy much more than Russia depends on the European market.  Putin will be explaining this to Angela Merkel in German while Obama, if he can make himself care, will be asking his interpreter, “What’d he say?”

The world is realigning in a way that does not work for America or Americans.  Is anyone watching?  Does anyone care? Short of producing this as a reality show or tweeting it out as a message, is there any way of getting the attention of Americans?  Short of Bill Clinton, does anyone know what the significance of significance is?  Is this thing on?  Anybody? Is anybody out there?