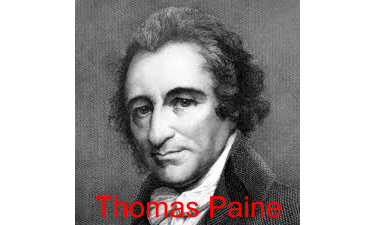 In 1776, many colonists still considered themselves British Citizens. Thomas Paine’s pamphlet, Common Sense, helped immensely to transition the minds of the people to consider Independence. In this portion of Common Sense, Paine wrote a very unflattering history of monarchical governments.

“… Government, even in its best state, is but a necessary evil… Wherefore, security being the true design and end of government, it unanswerably follows that whatever form thereof appears most likely to ensure it to us, with the least expense and greatest benefit, is preferable to all others.

… There is something exceedingly ridiculous in the composition of Monarchy… Male and female are the distinctions of nature, good and bad the distinctions of Heaven; but how a race of men came into the world so exalted above the rest, and distinguished like some new species, is worth inquiring into… In the early ages of the world, according to the scripture chronology there were no kings… Near three thousand years passed away, from the Mosaic account of the creation, ’till the Jews under a national delusion requested a king. ‘Till then their form of government… was a kind of Republic, administered by a judge and the elders of the tribes. Kings they had none, and it was held sinful to acknowledge any being under that title but the Lord of Hosts.

… For all men being originally equals, no one by birth could have a right to set up his own family in perpetual preference to all others for ever… [Hereditary right] is one of those evils which when once established is not easily removed: many submit from fear, others from superstition, and the more powerful part shares with the king the plunder of the rest.” Thomas Paine, Common Sense, January 10, 1776

“… the sound doctrine and unanswerable reasoning contained in the pamphlet ‘Common Sense’, will not leave numbers at a loss to decide upon the propriety of a separation [from Great Britain].” George Washington, Letter to Joseph Reed, January 31, 1776

—
“All anti-monarchical parts of scripture have been very smoothly glossed over in monarchical governments…” Thomas Paine, Common Sense, January 10, 1776