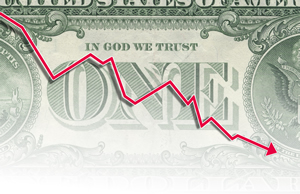 Only one “party” can speak truth about the U.S. dollar

The Tea Party is the only political movement in America that can tell the truth about the coming end of the US dollar’s (USD) role as the world’s reserve currency.

Both Democrat and Republican Party leaders know the truth, but, to date, neither has leveled with the American people; nor offered an explanation of the transition underway; nor reviewed the known and unknown consequences.

For their part, the media, across the ideological spectrum, runs from one fiscal puppet show to another, choreographed by the Obama regime, featuring the budget crisis du mois. It’s an odd drama since we have no federal budget these days beyond Continuing Resolutions (CR’s).

All the while, the irreversible path to the USD’s demise as the world’s reserve currency advances, with increasing speed.

Here are a few benchmark events that mark that path:

March 23, 2009:  The People’s Bank of China released a statement by Zhou Xiaochuan, Governor of China’s central bank, wherein he called for replacing the dollar as the dominant world’s reserve currency with “an international reserve currency that is disconnected from individual nations and is able to remain stable in the long run.”

Here’s an excerpt from Zhou’s statement:

“A super-sovereign reserve currency not only eliminates the inherent risks of credit-based sovereign currency, but also makes it possible to manage global liquidity. A super-sovereign reserve currency managed by a global institution could be used to both create and control the global liquidity. And when a country’s currency is no longer used as the yardstick for global trade and as the benchmark for other currencies, the exchange rate policy of the country would be far more effective in adjusting economic imbalances. This will significantly reduce the risks of a future crisis and enhance crisis management capability.”

China’s top banker suggested that, “Special consideration should be given to giving the SDR a greater role.”

“…an international reserve asset, created by the IMF in 1969 to supplement the existing official reserves of member countries.

The SDR is neither a currency, nor a claim on the IMF. Rather, it is a potential claim on the freely usable currencies of IMF members. Holders of SDRs can obtain these currencies in exchange for their SDRs in two ways: first, through the arrangement of voluntary exchanges between members; and second, by the IMF designating members with strong external positions to purchase SDRs from members with weak external positions. In addition to its role as a supplementary reserve asset, the SDR serves as the unit of account of the IMF and some other international organizations.”

“The U.S. dollar fell sharply Wednesday [March 25] following comments by Treasury Secretary Timothy Geithner, who said that the U.S. is ‘quite open’ to China’s suggestion of moving towards a Special Drawing Right (SDR) linked currency system…”

“…Geithner said Wednesday the U.S. dollar remains the main global reserve currency and he does not see a change in that status in the foreseeable future. Earlier this week, People’s Bank of China Gov. Zhou Xiaochuan called for a new international reserve currency to replace the dollar. Speaking in New York, Geithner said that Zhou was ‘a sensible man’ and that ‘everything he said deserves consideration.’ The dollar fell sharply after those remarks, prompting a clarification from Geithner.”

Geithner quickly walked-back his favorable comment about Zhou’s suggestion to replace the USD as the reserve currency.

The ping-pong exchange prompted by Zhou’s statement continued as the FED Chairman weighed in:

“Federal Reserve Board Chairman Ben Bernanke and Treasury Secretary Timothy Geithner Tuesday flatly rejected on Tuesday a call earlier in the day from a senior Chinese official to drop the dollar as the world’s key reserve currency.”

So, in less than three days, Zhou’s suggestion went from an idea worth considering to one “flatly rejected” by the two leading financial spokespersons for the United States.

June 1, 2009: During a visit to China to assure Beijing that its assets in USDs are safe, Geithner gets laughed at by college students.

“U.S. Treasury Secretary Timothy Geithner on Monday reassured the Chinese government that its huge holdings of dollar assets are safe and reaffirmed his faith in a strong U.S. currency… ‘Chinese assets are very safe,’ Geithner said in response to a question after a speech at Peking University, where he studied Chinese as a student in the 1980s.”

“His answer drew loud laughter from his student audience, reflecting skepticism in China about the wisdom of a developing country accumulating a vast stockpile of foreign reserves instead of spending the money to raise living standards at home.”

“In his speech, Geithner renewed pledges that the Obama administration would cut its huge fiscal deficits and promised ‘very disciplined’ future spending, possibly including reintroduction of pay-as-you-go budget rules instead of nonstop borrowing.”

“‘We have the deepest and most liquid markets for risk-free assets in the world. We’re committed to bring our fiscal deficits down over time to a sustainable level.’”

“‘We believe in a strong dollar … and we’re going to make sure that we repair and reform the financial system so that we sustain confidence,’ he said.”

In an interview with businessinsider.com, Geithner made other claims:

February 25, 2010:  While testifying on Capitol Hill, Bernanke warns lawmakers that the “United States could soon face a debt crisis like the one in Greece, and declared that the central bank will not help legislators by printing money to pay for the ballooning federal debt.”

According to the Washington Times, Bernanke added:

The accuracy of Bernanke’s last prediction depends on the definition of “soon.”

January 7, 2011: The IMF released a 42-pages report entitled “Enhancing International Monetary Stability—A Role for the SDR?” It suggests an enhanced role for the IMF in transitioning toward greater international financial stability. In other words, after the USD ceases to be the dominant reserve currency, there will be a more significant role awaiting the IMF.

Under the paragraph heading of “Way forward,” we read:

“These obstacles may not be insuperable, but significant political will and consensus across the membership would be needed to address them. That said, most other potential solutions to the problems in the IMS likewise require substantial investment of political will and consensus-building. With this proviso in mind, the rest of this paper outlines some concrete steps that could be taken to enhance the role of the SDR as an alternative reserve asset and unit of account, along with an initial discussion of their benefits, realism, and potential downsides. Clearly, none of these ideas is ready for implementation overnight, but the paper aims to stimulate an open-minded debate that could lead to identifying steps worth further consideration. Needless to say, enhancing the role of the SDR cannot on its own provide a remedy to all the ills of the IMS. But combined with the other efforts intensified in the wake of the crisis—global policy coordination and stronger surveillance; improved global safety nets; orderly capital account liberalization and financial deepening in emerging markets—a greater role for the SDR might help achieve stability as the IMS transitions to a more multipolar equilibrium, and beyond.” (highlighting added)

A blogger for the Washington Post blamed it on the Germans, writing that “the decision reflects a real, and somewhat disturbing, current in German politics.”

The Huffington Post reported that “Germany’s gold angst is not always rational,” and then characterized Germany as Ron Paul-like.

CNBC business news edged closer to the truth when it quoted Bill Gross, managing director at PIMCO, who tweeted, “Report claims Germany moving gold from NY/Paris back to Frankfurt. Central banks don’t trust each other?”

Forbes mirrored Gross’ tweet by suggesting that Germany’s move may be “the first major sign that trust between central banks across the globe could be deteriorating.”

The USD’s days as the world’s reserve currency are numbered.  The key questions are: (1) How many days until it formally ends? (2) How far will the USD fall, accompanied by what level of inflation? And, (3) what sort of international currency exchange arrangement will replace it?

It’s reasonable to assume that the USD’s fall has long been expected by the leadership of both major political parties.

A case can be made that the fiscal and monetary policies of multiple Republican and Democrat administrations contributed to this now inevitable outcome.

A case can, also, be made that that outcome was a foregone conclusion once globalization kicked into high-gear after the fall of the old Soviet Union and the reunification of Germany in 1989.

The current administration’s policies, led by Bernanke and Geithner, have accelerated the demise of the USD.

Despite claims to the contrary, the Fed is monetizing the debt and the Chinese students were right to laugh when Geithner tried to persuade them otherwise.

It’s also clear that, on those occasions when Bernanke claimed that the Federal Reserve would not monetize the debt, he was lying.  Perhaps he lied because it would have been too painful to publically tell the peoples’ representatives the truth, although most of them probably knew it.

In the arena of global markets and the role of the USD, its demise as the world’s reserve currency isn’t the elephant in the room.  It is the room.

Because neither Democrat nor Republican politicians will come clean with the American people, they share a bipartisan silence, to their collective shame.

That only leaves one “party” to tell We the People where the USD is going, and what it will mean.