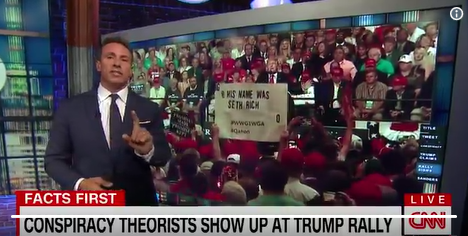 Originally from the Greek alphabet, eventually used for the writing of Latin, and then adopted by the languages of Western Europe, including English, the letter “Q” is the 17th letter of the alphabet.

The number “17” is, as you might expect, the 17th number in the Hindu–Arabic numeral system. The number falls between 16 and 18, and 1618 is the year The Great Migration (1618-1623) of slaves to the American Colonies began, although Cuomo seems to have not yet fully grasped the significance of the number “17” in relation to the slavery movement.  There’s still time though.

Used in tandem today by supporters of President Trump, Q-17 has been identified by CNN news analyst and part-time cryptology expert, Chris Cuomo (with a “C,” not a “Q”), as a secret Trump signal to his follows.

THE DAILYWIRE reported that Cuomo has proposed that “people at his rallies that are looking for the number ‘17’ because ‘Q’ is the 17th letter in the alphabet and that a ‘17’ he [Trump] included in a recent tweet could be viewed as a sign by some of his supporters.” 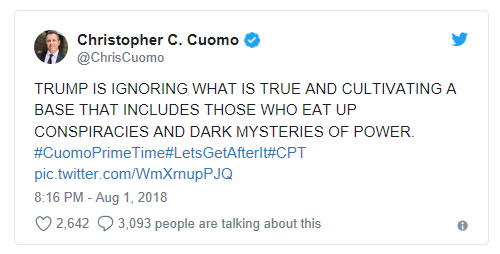 THE DAILYWIRE also stated that “Cuomo floated the idea that Trump supporters who believe in the ‘QAnon’” conspiracy theory could be looking for cryptic messages in Trump’s tweets and that it is possible the president could be sending secret messages through his tweets to communicate with fringe elements of his base.”

So, what might be the secret messages that Trump is cryptically dispatching to his base?

Cuomo, apparently, has no clues as to the messages…messages.

Nor about many other things, large and small.

Note: This series entitled “Alinsky Rule 5” is based on the 5th in the list of Rules for Radicals created by the late Socialist-Communist community organizer in Chicago, Saul Alinsky.  Both former President Obama and former Secretary of State Hillary Clinton are long-time admirers/followers of Alinsky. His Rule 5 is: Ridicule the opposition.  Sometimes all one must do to ridicule is directly quote the source and, ipso facto, the ridicule surfaces on its own. Such is the case herein.  As ridicule goes, it is low-hanging fruit from the tree of truth that is stranger than fiction.