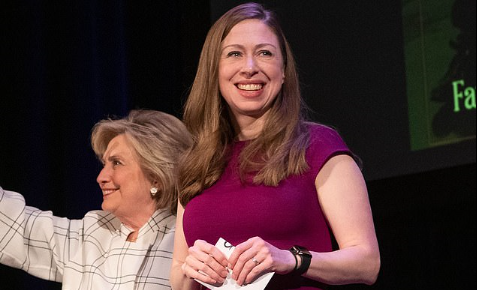 At age 39, Chelsea Hubbell Clinton has parlayed her connections into a mountain of money, as reported by The Hill on January 6, 2020.

“Chelsea Clinton has reaped $9 million in compensation since 2011 for serving on the board of an internet investment company, according to Barron’s, the financial publication.”

Chelsea’s mother is pictured below with a leading source of her daughter’s green harvest. Namely, Chelsea’s role as a Board Member for the IAC/InterActive Corp owned by billionaire Barry Miller.

The IAC website touts Chelsea’s work with The Clinton Foundation as the basis of her value to the conglomerate, owned by Miller, that includes 150 brands such as Expedia, Vimeo, Tinder, Angie’s List and Home Advisor.

This isn’t the only time Chelsea has cashed in on her notoriety. She was paid an annual salary of $600,000 as a “special correspondent” for NBC News from 2011 into 2014, according to the Daily Mail.

Her four-part series on NBC chronicling the history of the Rose Law Firm in Little Rock, Arkansas was heralded among the three-letter acronym news outlets as displaying extraordinary skill by someone with no experience in TV journalism.

What’s next for the budding millionaire?

Sources report that Chelsea is writing a book entitled “How to Get Rich in America With No Skill or Talent”.  The book is expected to be released by Simon & Schuster, the publisher who offered a book last October, co-authored by Hillary and Chelsea, entitled “The Book of Gutsy Women: Favorite Stories of Courage and Resilience” (ISBN-13: 978-1501178412).

One chapter in Chelsea’s solo run as an author will chronicle the life of her father-in-law, Edward Maurice Mezvinsky – a former two-term congressman and convicted felon who pled guilty to 31 charges of bank, mail, and wire fraud that involved $10 million.  Ed spent five years in a federal prison.

Chelsea’s book is due out mid-summer 2020.  Some speculate that it will help promote her mother’s third, and likely final, run for the Presidency.