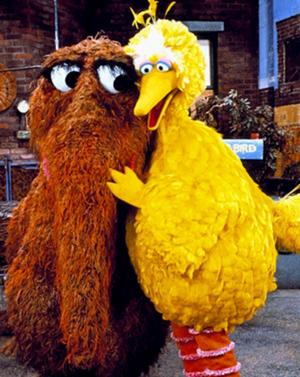 BREAKING NEWS:  Aloysius Snuffleupagus, also known as Mr. Snuffleupagus, or “Snuffy” for short, commented today on the endorsement of his Sesame Street co-star, Big Bird, for Barack Obama when he was questioned by reporters at a Hollywood, California Chinese Restaurant.

Republican Presidential candidate and former Massachusetts Governor Mitt Romney suggested, during the first Presidential Debate, that the federal government should not be borrowing money from China to underwrite the Public Broadcasting Service (PBS).  Romney mentioned Big Bird as an example of a government expenditure that could be supported by private contributions rather than taxpayer money.

Mr. Snuffleupagus, a long-time TV-character friend of Big Bird, whom he called “Bird,” was for years the only member of Sesame Street cast who could only seen by Big Bird; he was Bird’s imaginary friend.

Asked to comment on the pro-Obama TV ad featuring Big Bird, Snuffy said, “He’s a big, yellow, overgrown canary. A fowl creature, if you ask me.  His living room is carpeted with newspapers; the place is a toxic waste site! Someone call the E.P.A.! Plus, he’s a bird, but he can’t fly! What’s up with that? And he talks like someone’s squeezing his tail. Where do you think the phrase ‘bird brain’ came from?”

A CNN reporter asked, “Since the Bird supports Obama, you do, too, right?”  Snuffy responded, “Don’t you know better than to ask someone named ‘Aloysius’ a leading question?”  He added, “Look at me. I’m obviously from the pachyderm family, making me a born Republican. I support Romney.”