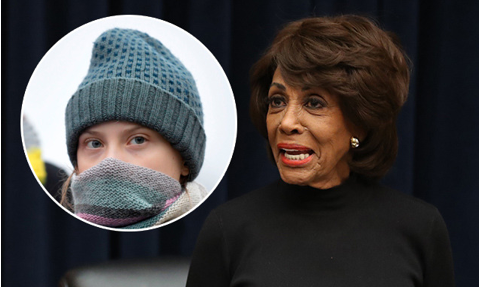 When the House convenes in 2020, California Congresswoman Maxine Waters will demanding that climate activist Greta Thunberg be called to testify before the U.S. Senate in the impeachment trial of President Trump.

Thunberg, TIME‘s “Person of the Year” for 2019, and her father, recently phoned Water’s California office claiming to have a taped confession from Trump admitting to the charges in the House Democrats’ articles of impeachment.

Thunberg, sounding very distressed on the phone call, said Trump met her at the United Nations where both were scheduled to speak and he confessed to threatening Ukraine’s president.

Thunberg told Waters that, “He came over, he leaned towards me, and said softly, ‘Listen to me very carefully, little girl, you will never achieve your goals’.”

Thunberg cried while recounting the confrontation.

Referring to an audio tape of the conversation between the young climate crusader and Trump, Waters exclaimed, “Oh my God! He mentioned the Ukrainian president?”

Greta’s father, who was also on the call, suggested his daughter could testify before the Senate, if needed.

Waters eagerly responded, “And if the public knew that he talked to Greta like that, he made her cry, and told her she would never achieve her goals — this will go against him, too.”

“You bring it to me,” Waters said referring to an audio recording father and daughter claimed to have.

She continued, “You tell me what day you can get there. And we’ll arrange to meet with you as quickly as we can.”

Shortly after the call ended, a Waters spokesperson called a previously unscheduled press conference of local reporters for an exclusive overview of the remarkable phone call.

The spokesperson, a recent hire from the D.C. office of Sen. Dianne Feinstein, D-CA, where he had worked for over twenty years as Feinstein’s chauffeur, read a brief statement on behalf of Waters:

“Congresswoman Waters has wonderful news for all Americans! Trump is done! She will soon have, and share with all Americans, an audio tape that will prove, once and for all, that Trump is an evil tyrant and a big fat bully – even of a young world-famous crusader who is fighting against the destruction of the earth’s climate.” (a reporter interrupted to ask if the source is New York Congresswoman Alexandria Ocasio-Cortez) “No, someone with more international stature than AOC. And not Al Gore either. Please don’t interrupt again…Congresswoman Waters will, when the House reconvenes, propose a Bill that will reveal the name of the source and demand that the source be called as a witness in the Senate Trump Impeachment Trial. America’s national security, as well as global security, depends on hearing this witness testify to the abject and terrible evil of Donald J. Trump.”

With that, the news conference ended.