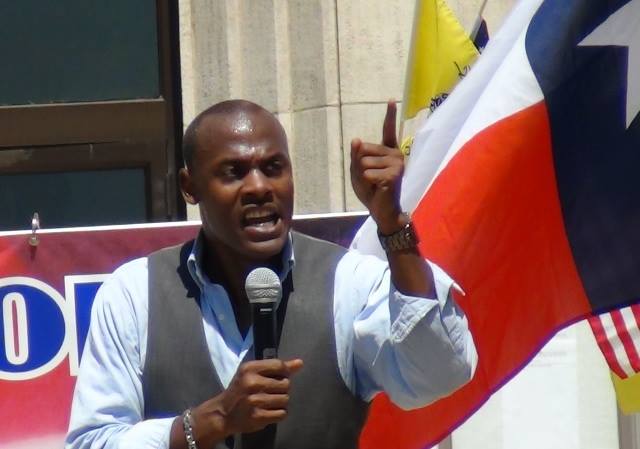 In preparation and consideration of a potential run for the Texas House of Representives, Apostle Claver T. Kamau-Imani has formed a potent exploratory committee.

With the September 25th announcement by State Rep. Dwayne Bohac (R) that he would not seek re-election in 2020, House District 138 in west Houston is now an open seat.

“I’ve been a resident of HD138 since 1997. I believe there can be no other candidate to enter this race that will know this district and its citizens better than me,” said Apostle Claver.

Apostle Claver is the founder, president and CEO of RagingElephantsRadio.com. Founded in 2013, RER is the only 24/7 audio streaming media company that primarily covers Texas politics and news. RER was created with an admitted bias toward liberty and Texas sovereignty. Apostle Claver hosts a two-hour nightly political talk program.

Apostle Claver became a national personality when in July, 2009 his political action committee erected a billboard that declared “Martin Luther King, Jr. Was a Republican”. The billboard was located at the MLK exit of Houston’s I-610 South Loop.

Outraged by the billboard’s message, and located in the heart of the black community (Sheila Jackson-Lee’s district), infamous black activist Quanell X and the New Black Panthers launched a protest and campaign to have the billboard removed. The video of Apostle Claver crashing and taking over X’s press conference about the billboard went viral and the story was picked up by national media.

Apostle Claver responded to the outrage by erecting identical billboards in several Texas cities and around the United States in black neighborhoods — all of which drew local media coverage.

Apostle Claver has been called “the most important conservative voice in Texas”. Liberty movement activists often refer to him by his nickname, “The Purifier”. The nickname was given to him by former Speaker of the House Joe Straus in a 2012 campaign attack ad. So effective and influential as an activist for conservative values, the Straus forces produced the video against Apostle Claver although he was a private citizen.

Known for being a rabid defender of life, liberty, and prosperity, Apostle Claver aggressively advocates for the Texas GOP platform. If a formal campaign for state representative is announced, it is expected that the central focus of his campaign will be the platform’s legislative priorities.

Documented by numerous videos and audio recordings, there are few who can match Apostle Claver in extemporaneous public speaking and the delivery of a long-form speech from the stage.

If Apostle Claver announces a formal campaign for HD138, he will immediately be considered the front runner and favorite to win the March, 2020 primary. No declared or potential candidate will be able to surpass his name ID.

“One thing is certain. HD138 and the Pink Dome are not in need of any political neophytes, or those with insufficient battle scars earned from the continuous fight for Texas liberty,” said Apostle Claver.

“The forming of this exploratory committee exhibits a diverse collection of influential and powerful conservative activists from the whole of Texas. This will not merely be an in-district contest. Saints and patriots from border to border in Texas are supporting this effort. Because no matter where they reside, they know with all confidence that I share their liberty-driven, Jesus-ordained values. They understand that there will be no compromise, and no surrender of those values. Ever!”