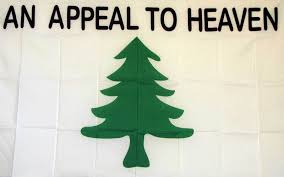 If found guilty in a court of law, an accused has a right to appeal to a higher court. Prior to the American Revolution, the Colonists presented their grievances to the court of King George III many times and pleaded for justice. The King, however, became increasingly hostile and offered no appeal. Patrick Henry, in his “Give me Liberty or Give me Death” speech, summarized the feelings of many, “An appeal to arms and to the God of hosts is all that is left us!” If King George would not rule with justice, the Colonists were determined to appeal their cause to a higher Court. Here is an example of the phrase, “An Appeal to Heaven”, seen on a flag during the Siege of Boston.

“Yesterday morning, according to orders issued the day before by Major General [Isaiah] Putnam, all the Continental Troops under his immediate command assembled at Prospect Hill [Boston], when the Declaration [‘The Causes and Necessities of Taking up Arms’] of the Continental Congress was read; after which an animated and pathetic [passionate] address to the Army was made by the Rev Mr. Leonard, Chaplain to General Putnam’ s Regiment, and succeeded by a pertinent prayer…

Then General Putnam gave the signal, and the whole Army shouted their loud amen by three cheers, immediately upon which a cannon was fired from the fort, and the standard lately sent to General Putnam was exhibited flourishing in the air, bearing on one side this motto, ‘An appeal to Heaven,’ and on the other side, ‘Qui transtulit sustinet’ [‘He Who Transplanted Sustains.’] The whole was conducted with the utmost decency, good order, and regularity, and the universal acceptance of all present.” Essex Gazette, July 19, 1775

“We for ten Years incessantly and ineffectually besieged the Throne [of King George]… [Now,] in defense of the Freedom that is our Birthright… [and] With an humble Confidence in the Mercies of the supreme and impartial Judge and Ruler of the Universe, we most devoutly implore [petition] his Divine Goodness to protect us happily through this great Conflict…” Journals of Congress, Declaration of The Causes and Necessity of Taking Up Arms, July 6, 1775
—
“… to the Persecution and Tyranny of his [King George’s] cruel ministry we will not tamely submit- appealing to Heaven for the Justice of our Cause, we determine to die or be free.” Massachusetts Provincial Congress, To the Inhabitants of Great Britain, April 26, 1775