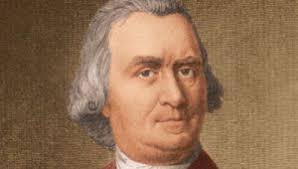 “Our forefathers… opened the Bible to all, and maintained the capacity of every man to judge for himself in religion… We have explored the temple of royalty, and found that the idol we have bowed down to has eyes which see not, ears that hear not our prayers, and a heart like the nether [lower] millstone. We have this day restored the Sovereign, to whom alone men ought to be obedient. He reigns in Heaven, and with a propitious [merciful] eye beholds his subjects assuming that freedom of thought and dignity of self-direction which He bestowed on them. From the rising to the setting sun may His kingdom come.

… No man had once a greater veneration for Englishmen than I entertained. They were dear to me, as branches of the same parental trunk, and partakers of the same religion and laws… But when I am roused by the din of arms; when I behold legions of foreign assassins, paid by Englishmen to imbrue their hands in our blood… Heaven forgive me if I cannot root out those passions which it has implanted in my bosom, and detest submission to a people who have either ceased to be human, or have not virtue enough to feel their own wretchedness…

Courage, then, my countrymen! Our contest is not only whether we ourselves shall be free, but whether there shall be left to mankind an asylum [refuge] on earth for civil and religious liberty.” Samuel Adams, Oration Delivered at the State House, August 1, 1776

“The hearts of your soldiers beat high with the spirit of freedom; they are animated with the justice of their cause; and while they grasp their swords, can look up to heaven for assistance.” Samuel Adams, Oration Delivered at the State House, August 1, 1776

“… by the beneficence [kindness] of Providence, we shall behold our empire arising, founded on justice and the voluntary consent of the people, and giving full exercise of those faculties and rights which most ennoble our species.” Samuel Adams, Oration Delivered at the State House, August 1, 1776