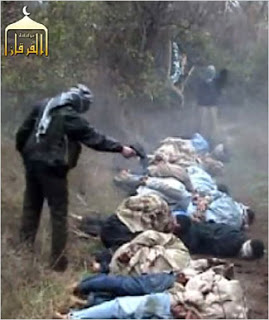 Upon reading this title, anyone familiar with me or my writing will assume that they are witnessing the day AronSpeer finally went ‘round the bend.’  But I ask you to reread the title, emphasizing the only un-capitalized word; Al Qaeda is not the enemy.  This is a radically different statement.

Recently, we have seen the New York Times print an article which is a statement of complete faith in the ignorance of their readership.  Basically, the article just restated the original Obama administration lie regarding an unseen video and nonexistent street demonstrations being involved in the attack on our Benghazi diplomatic post over a year ago.  This is the attack in which four Americans were killed including a US ambassador.

The Times article contradicts not only all the evidence, but the later statements of their favorite administration and subsequent articles printed in the NY Times itself.  Their claims that neither Al Qaeda nor any of its affiliates were involved in this attack are met with counter claims from conservatives in an attempt to prove a link to Al Qaeda.  This is a colossal waste of our time and energy.  It all stems from a failure to properly identify the enemy after the 9-11 attack on the World Trade Center in New York City.

In order to minimize the threat, lull the American public into a false sense of security and to placate a small, but highly influential constituency, a small band of Islamist miscreants (Al Qaeda) were named as the sole perpetrators of this act. The impression created is that all we need do is to defeat Al Qaeda and all our troubles will be over.  Yet almost no one hearing this lie, nor the prevaricators themselves, believes this to be true.  Across the political sandscape all one can see are a multitude of ostrich butts.

If the perpetrators of the Benghazi incident do not refer to themselves as Al Qaeda or do not take orders from a group that does, is the attack somehow less heinous or the situation less dangerous?  Does the fact that numerous groups use the same tactics as Al Qaeda and are driven by the identical murderous philosophy make us somehow safer?  The questions are absurd because of the obviousness of the answers.  But somehow we are expected to be less concerned if an assault on Americans cannot be traced back to the corporate offices of Al Qaeda.

By setting up Al Qaeda as the enemy and the only enemy, much can be dismissed by American leadership.  But Americans accept this dismissal at their peril.  In spite of claims by this administration that Al Qaeda is on the run, the opposite is obviously true.  America ran from Iraq as soon as Obama could put his personal stamp on American foreign policy.  Obama supported the wrong faction in Egypt and was ineffectively late in noticing the situation in Syria. America retreated and allowed Russia to set the terms of the ineffective response to Syria.  All across the Middle East America is retreating.  The lack of any effective response to Benghazi over a year later is only one glaring example.  Al Qaeda’s resurgence in Iraq is another.

But setting up Al Qaeda as the only enemy allows us to address only the tip of the iceberg.  Al Qaeda is not even the umbrella group for all Islamic bad actors.  Many militant Islamic groups also consider Al Qaeda to be their enemy.  The true umbrella group for all these bad actors, the one element they all have in common, is Islam itself.  Islam consists of only two camps, radical Islamist terrorists and Muslims who are complicit in their deceit and who provide them cover in their communities.  The former group we are told is small, only about 10% of all Muslims.  This amounts to an army of over one hundred million. The second group, about 90% of all Muslims, amounts to over a billion who shield and protect the first group.

Often in speaking to young people (30’s and 40’s; young is a relative term) they tell me of the “nice” Muslim at their work place.  The niceness usually consists of their soft spoken manner and the fact that they have not yet attempted to kill anyone the young person knows personally.  It seems like a low bar and an unwarranted granting of “the benefit of the doubt.”  But what is the source of this doubt?  Surely it does not come from the daily barrage of news reports about the behavior of Muslims around the world.  Nor could it come from any understanding of history over the past millennia.

It is as if nothing which happens is of any significance unless it happens to them personally.  They say a smart person learns from his mistakes; a wise person learns from the mistakes of others.  But there is neither wisdom nor intelligence in this youthful approach to their experience of Muslims.  This is not a situation in which the individual would benefit from being smart; smart is way too late.  Only wisdom will save us in this situation; so wise up.