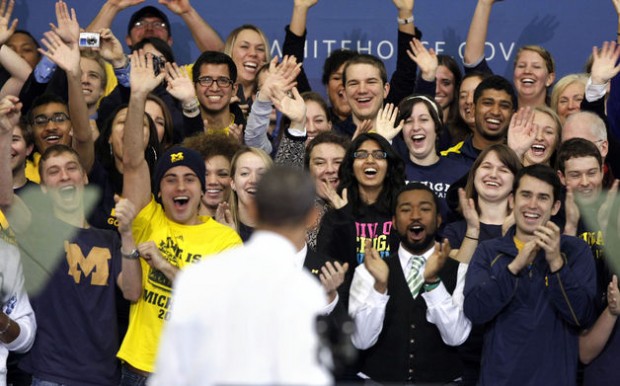 Emma Collins, the voice behind OnlineMBA.com’s 2012 school rankings, writes frequently about issues that face the nation’s college-aged population. In the post that follows, she tackles the youth vote in the most recent presidential election and provides some insight into what it might mean for policies coming down the pike in the second half of the Obama administration. America’s fiscal future is something that Tea Party 911 focuses a lot on, and Emma’s article adds an important outside perspective to the conversation.

The Business of Fiscal Opinion: A Look at the Youth Vote in 2012

According to many pundits, the 2012 presidential election was won with the youth vote. Had Gov. Romney managed to sway more voters in the 18-29 age bracket, these analysts say, he may have been able to flip key states like Florida, Virginia, and Ohio—which could have been the difference between the White House and the resounding defeat he faced in early November. Some say that the Republican party has simply lost touch with the younger generation. While there may be some merit to this claim, really understanding what it means—its roots, its manifestations, and its causes—is essential to projecting fiscal policy and lawmaking over the next generation.

Reports show that about half of all eligible voters aged 18-29 voted in the 2012 presidential race. This puts the total youth vote somewhere in the vicinity of 22-23 million votes: just about the same number as turned out in 2008. In the 1990s, people of this age group voted much less regularly, often barely scraping 40 percent. “I think we’ve now established a fairly decent pattern that his generation is different from their older brothers and sisters, and we can put those rumors of apathy to bed,” Heather Smith, president of national youth voting campaign Rock the Vote, told Politico shortly after the election. “This voting bloc can no longer be an afterthought to any party or campaign.”

So just how did the youth vote break down? While President Obama was able to sweep up support, immediately concluding that young adults today are liberal democrats is still a stretch too far. New research from the Center for Information and Research on Civic Learning and Engagement (CIRCLE) shows that a significant percentage of people in this demographic self-identify as moderate conservatives. Where the vote was lost was on more polarizing issues like abortion, immigration, and same-sex marriage.

“64% of 18-to-29 year-olds indicate that abortion should be legal in all or most cases, compared to 58% of older adults. On immigration, 68% of young voters support a pathway to citizenship for immigrants who do not have legal status,” CIRCLE’s most recent report showed. “Most notably, while only 45% of older voters support same-sex marriage, 66% of 18 to 29 year olds would support legalizing such unions in their state.” The modern Republican party is outspoken against all of these issues, which may have led to something of a cleavage between it and the growing voter core of what is known in many circles as the “millennial generation.”

That generation is also increasingly diverse. “A larger percentage of the youth electorate in 2012, when compared to 2008, self-identified as Latino/Hispanic, Black, or lesbian, gay or bisexual,” CIRCLE said. “Young voters who were in the 25-to-29 year-old age range were just as likely to have younger children in the home as older voters (41% to 38%).” Additionally, over half belonged to families with total annual incomes under $50,000; almost a third had incomes less than $30,000. While Republicans seem to have banked on the dwindling economic conditions and job prospects to propel the vote—youth in this country face an average 10 percent unemployment rate, despite recent claims of rebound—promises of job revitalization did not seem to win out when compared to the menu of other tough topics.

“For any young voter who might favor conservative economic policies, many are turned off by a host of issues on which the GOP fails to align with the mainstream opinions of their generation,” the Huffington Post recently wrote. The hard line drawn by the party, which was likely originally designed to take a firm stance or promote a uniform agenda, may actually be turning voters away. “The Republican party is so adamantly against—or judgmental of—issues like abortion, contraceptives and same-sex marriage that young people, many of whom don’t see these issues as much of an issue, are turned off by the negativity,” Jessica Bruning, a former Republican staffer who voted Libertarian, told the Post.

This sort of information is valuable to politicians and analysts looking to predict the fiscal policies of the future. An increasingly passionate, socially-conscious, and engaged young adult sector is bound to have an impact on policy-making going forward. Unless the Republican party is able to radically reframe its message, the future looks to be one where a progressive and largely liberal agenda will rule the day.

“The left has portrayed conservatism as an ideology that caters to and is solely espoused by rich white males. They’ve been successful,” Amy Lutz, a St. Louis University student and self-identified conservative, told The Blaze. “Sure, conservatism espouses solid values and policies sure to push our country in the right direction. But let’s be honest, we fail at articulating conservatism in a way that’s attractive to youth voters,” she said. “We don’t need to change our principles. We just need to repackage them.”

There should be little doubt in anyone’s mind that young people are taking an increasingly active role in shaping our national identity. In many respects, this trend is to be praised. For conservatives, though, it means that some serious reshaping is in order, to stay relevant if nothing else.