In East Texas, he’s a mild mannered physician who plays the drums. But as soon as he crosses the Travis County line, Senator Robert Deuell morphs into something altogether different: a RINO who is very supportive of laws that advance the radical environmentalist agenda. Consider the following:

Exhibit A: Deuell voted for an amendment to a House bill, which would have permitted a municipality to “bring a civil action [against a homeowner] for the enforcement of an ordinance relating to energy conservation or energy efficiency.” In other words, if your city decided that you used too much energy in your home or business, it could file a lawsuit against you.

Exhibit C: Deuell is quite comfortable imposing new taxes (also called “fees”). Even though we are already paying too much for gas, he advocated adding a ten-cent-a-gallon tax to gasoline. How could he possibly justify such thing in times like these? My guess is that like Obama, he thinks that the more expensive gas is, the less of it we will use, thus “saving the planet” from the polluting masses.

Exhibit D: A bill was proposed in the 81st session that would have established funds for “green-jobs skills training.” The future of the green industry, and the faulty science it is based upon, is dicey at best. Solyndra anyone? When politicians vote to invest in dubious businesses, no matter how fashionable, they don’t risk their money, they risk ours. Estimated cost to taxpayers: $17 million. 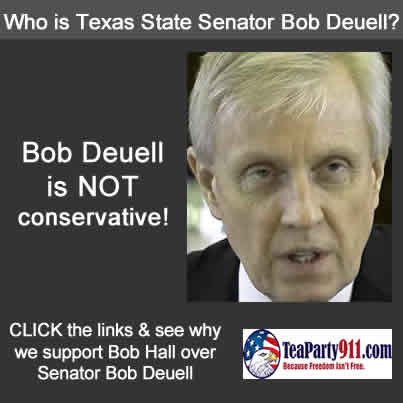 Exhibit E: In 2013, Deuell voted for HB 3509, “which would [have] empowered Texas Parks and Wildlife Department to implement the federal Endangered Species Act,” a law that is regularly misinterpreted by liberal bureaucrats in order to “place species protection above every other consideration, including national security, prosperity, and individual freedom.” Just what we need: more federal overreach. Fortunately for Texas, Governor Perry put a stop to this nonsense.

And he proclaims himself to be a conservative! Should Bob Deuell continue to “represent” the sensible, liberty-loving people of Senate District 4? I think not. On March 4th, vote in the Republican Primary, and vote for Bob Hall, a real conservative.